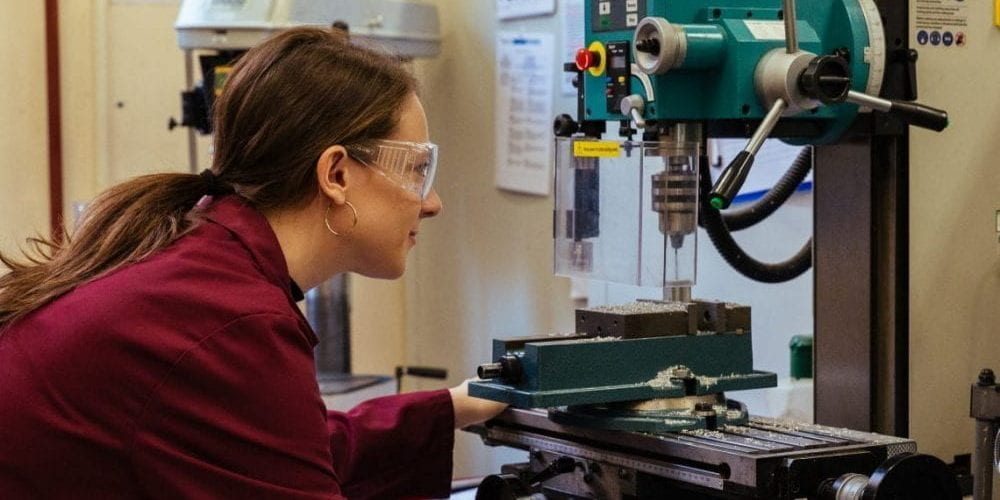 It’s easy to take electricity and electronic devices for granted, but they’ll have a big role to play in making the planet cleaner and greener. Research in this field is at the forefront of a more eco-friendly approach to technology.

We talked to Zoe Davidson and Suzie Collins, both PhD students in the Electrical and Electronic Engineering department at the University of Bristol. Zoe is part of the photonics team, looking into semiconductor materials and their use in absorption and emission, mostly around the telecommunication spectrum. Suzie is part of the Electrical Energy Management Group and her PhD is on airgap winding machines and their potential for making future aircraft lighter, and therefore more efficient.

What is your educational background and what led you to choose your areas of research? Find out more about our Open Days

Suzie: I took an undergraduate degree in Electrical and Electronic Engineering here at the University of Bristol. At school, I really enjoyed maths and physics. Nobody else seemed to like learning about electrical circuits, possibly because they’re quite difficult to visualise at that level,  so I gave myself a challenge: I want to learn this! I want to understand this! I’ve been passionate about electrical and electronic engineering ever since.

Zoe: My pathway was a bit different. I’m from New Zealand and took physics, chemistry, maths and technologies at our A-level equivalent. I enjoyed those subjects but didn’t get the grades to study engineering at university. Instead, I started a physics degree through clearing, took some engineering modules in the first year and did so well at them I was able to transfer to the Opto-Electronics program with a scholarship.  After University I worked as an optical engineer for Vodafone. After a while I became aware that the leading photonics developments were happening in research laboratories.  I wanted to apply but you either had to have 20 years’ experience working in a telco, or a PhD. A PhD takes three and a half years, so I thought that will save me some time.

Are there engineers who’ve inspired you? Or any recently engineered products that have caught your eye?

Zoe: Ada Lovelace and the other engineering pioneers were inspirational.  I have seasonal favourites too. At the moment, there’s a guy called William Shockley. He’s one of the people credited with inventing the transistor, which revolutionised how electronics works. Also Scott Corzine, an American who did quite a lot to develop our understanding of superconductors.

In terms of devices, anyone who works in photonics would go for the LED. It’s changed life as we know it. The blue LED even won a Nobel Prize when it was released.

Suzie: What’s very topical is the evolution of the electric car. I’m interested in how things have progressed from the early 2000s with General Motors’ release of EV1, to the the very popular Toyota Prius hybrid and now fully realised electric super cars are being introduced. It will be interesting to see what new developments are going to be made by the likes of Tesla and Jaguar Land Rover.

If you met someone thinking of studying engineering, what would your advice be?

Suzie: Engineering is a challenging subject, so you need to persevere. Don’t be put off by the difficulty level or by stereotypes because there are loads of those, especially for women in engineering.

Zoe: My top tip, which is true for anyone, is don’t be afraid to fail. If school isn’t your thing, you could opt for an apprenticeship rather than A-levels. There are many pathways into engineering. I think I’m a good example of that. I didn’t do well at A-levels but still got into engineering and now I’m studying for a PhD. Don’t be afraid to put yourself out there. Try new things. You might surprise yourself.

What motivated you to get involved in outreach at the university?

Suzie: My mum’s an engineer and she suggested getting involved. I did a week’s university experience before coming here and it was so useful to find out what student life is like. It really motivated me to apply and work hard for the grades I needed. Having been an outreach participant, I’m now going to be running an outreach course. It’s a full circle moment.

Zoe: My  whole family is into volunteering so it’s something I’ve always done. At Vodafone, there was a school near my workplace that ran a Code Club where professionals teach kids who otherwise wouldn’t have that opportunity. I really, really enjoyed it so when I arrived in Bristol, I was keen to find something similar. There’s this thing that kids do, a facial expression when they figure something out. They’re still young and not afraid of looking uncool to their friends and it’s like watching a light bulb turn on behind their eyes.

This year’s theme for International Women in Engineering Day is ‘Shape the World’. How do you think engineers will do that in the next decade?

Suzie: The electrification of aeroplanes and cars is very exciting;  seeing everyone come together to do what’s right for the planet rather than what will go faster or carry more people. Transport needs to be more eco-friendly and that needs to happen straight away. It might not be achievable in ten years though, some engineering changes happen overnight but it can take much longer to get an aeroplane from design to runway.

Zoe: Yes, I’d agree, timeframes in engineering are really hard to define. In telecommunications, there was a big time gap between 1G and 2G but only a year between 4G and 5G and we’re already talking about the next phase.  There are really interesting conversations around the eco side of engineering. How do we make things more efficient and sustainable? For example, there’s work to be done on solar panels as they currently have a maximum efficiency of about 33 per cent.

So finally, what was your favourite toy as a child?

Suzie: Mine’s a bit of an engineering cliché – it was Lego, especially Lego Technic that had a motor so you could make a complete system. We had a big box of random Lego bits to dive into and build bizarre things with.

Zoe: My dad’s shed, if you can call that a toy. On the weekends, he’d give me and my sister a block of wood, a hammer, some nails, bottle caps, pieces of ribbon and things like that and tell us to design something. We’d spend the whole weekend bashing away and trying to make our creations look good. Yeah, that was probably my favourite toy growing up.